BYGONE BOSWORTH is a series of periodical publications by Husbands Bosworth Historical Society.

The Historical Society has recently published "Flying at Husbands Bosworth".

Any account of flying at Husbands Bosworth is bound to focus largely on the activities of the World War II aerodrome, RAF Husbands Bosworth. This book attempts to tease out and record in a palatable form many of the technical issues, social and personal stories and the inevitable tragedies, that relate to Bosworth but could easily refer to any such wartime establishment.

The book also looks at local flying before the war, when Mr. Lee’s farm at Cote Hill, an established ‘hot-spot’ of activity for the fledgling gliding movement, was being seriously considered for elevation to airport status.

After the war, flying at Bosworth continued almost without pause for breath, in the greater part amongst the relict of war, with the rise of gliding and the private pilot’s licence...

Copies are available from Melvyn Forman 01858 880281 (email: This email address is being protected from spambots. You need JavaScript enabled to view it.)

Prices as quoted. Postage and packaging extra. Please email for a quote.

WORKING IN HUSBANDS BOSWORTH IN THE FIRST DECADE OF THE TWENTIETH CENTURY”
by John Knight. A comprehensive description of the trades and businesses carried on in Husbands Bosworth at the turn of the century.

STREET LIGHTS FOR BOSWORTH
From Market Harborough Advertiser , November 1948
Report of the installation of electricity to the village...

From Market Harborough Advertiser , February 18th 1949
Recollections of paraffin lamps obtained by R H P Hutchinson of Bosworth House for use as street lighting around the village.

Extracts from “MIDLAND MAIL”December 1946
Husbands Bosworth News: Christmas at Parish Church...
Presentation to Organ Blower: “Mr. George Law, who has acted as blower for over 26 years…”

CHILDHOOD MEMORIES – THE GOLDEN YEARS 1904-1914
EXTRACTS FROM THE MEMOIRS OF MRS. DAVID CONSTABLE-MAXWELL

MEMORIES OF MAY DAY CELEBRATIONS
Collected by Doris Knight

MY SCHOOL DAYS
By Edgar Stanyon

EXTRACTS FROM A FARM DIARY
Kept by Mr. Tom Bromell in the year 1908
Mr. Bromell farmed at Lodge Farm, formerly known as Glover's Farm and Carrland Farm, which was demolished in about 1941 when the airfield was built.

HUSBANDS BOSWORTH IN 1950
Extracts from a Women’s Institute Survey. A survey of property, institutions and occupants of Husbands Bosworth parish...
Prepared by the late Miss E M Marsh

THE YEARS 1918-1919
by Edgar Stanyon
Memories of convalescence as a wounded soldier.

THE BOSWORTH CRICKET CLUB
by Coral Jennings
Extracts from a talk given to the Historical Society in 1978.

SOME MEMORIES OF MY BOSWORTH CHILDHOOD
By May Gilby
(Based on a tape-recording made for the Historical Society by Mr. A Henley)

MORE THREADS IN THE BOSWORTH TAPESTRY
A further talk given to the Historical Society by Bertram Copping.

A FEW NOTES ABOUT PAPILLON HALL
By Edgar Stanyon

FURTHER LANDMARKS IN THE ADMINISTRATION OF THE HUSBANDS BOSWORTH CHARITIES
By John Knight (Hon. Sec. Trustees)

COMMUNITY LIFE IN HUSBANDS BOSWORTH DURING THE FIRST DECADE OF THE TWENTIETH CENTURY
By Hilda M. Porter

SOME MEMORIES OF A BOSWORTH CHILDHOOD
By G.R.Tilley

HUSBANDS BOSWORTH AND THE KAISER'S WAR

MY EXPERIENCES ON WORLD WAR I
By E. Stanyon

BOSWORTH'S WAR AS SEEN IN THE GARTREE DEANERY MAGAZINE

DECEMBER 17TH 1914
A concert in the Turville Memorial Hall in aid of the Belgian Local Relief Fund,
performed by the school children and the Band of Hope…

FIFTY YEARS IN BOSWORTH
From a talk given to the Historical Society by Doris Lang on March 4th 1987.

DEAR PARISHIONERS AND FRIENDS
Extracts from the Church Parish Magazine, which was started in 1883 by the Rev. R. Tomlinson
and continued until he left the village in 1887.

THE TURVILLE MEMORIAL HALL
The opening of the hall in 1896 and activities in the early years. Article based on the report taken from Market Harborough Advertiser March 21st 1896.

PROGRAMME FOR THE FUND-RAISING “GRAND BAZAAR”.

VERY BYGONE BOSWORTH, or How It Might All Have Begun
By Richard Bird

REMINISCENCES of the late Coral Jennings
...who was born in 1907 and came to live at Highfields House in 1919, where his father was the Head Gardener.
Memories of sports, entertainment and social activities…

EXTRACTS FROM AN INTERVIEW WITH PETER KNIGHT of Husbands Bosworth
Conducted by Steph Mastoris of Harborough Museum.
Memories of his father’s funeral business…

1891 CENSUS OF HUSBANDS BOSWORTH
Compiled and edited by Marion Allen

Discussions on social aspects of the population and street layout maps.

A SHORT HISTORY OF EDUCATION OF CHILDREN IN HUSBANDS BOSWORTH SINCE THE 17TH CENTURY.
Taken from a study of schooling in Husbands Bosworth by Janice Prowse (now Staples) written in 1984.

CHAPTER 3
Education for All

CHAPTER 4
Into the Twentieth Century

CHAPTER 5
After the First World War

AN SPECIAL EDITION CELEBRATING THE 60th ANNIVERSARY OF VE/VJ DAY & THE ENDING OF WORLD WAR II.

THE BUILD-UP TO WAR
Husbands Bosworth prepares to go to war...

THE WELCOME HOME FUND
Includes a full list of recipients

A time capsule in words and pictures. 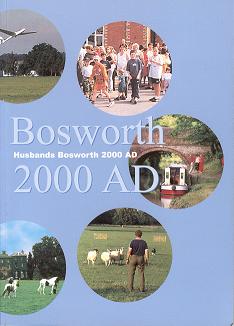 This book was prepared by Husbands Bosworth Historical Society to mark the end of the millennium by describing the village as it was at the turn of the century. In compiling it we invited everyone in the village to contribute information in order to give as rounded a picture as possible of life in the village.

The book chronicles village events that took place during the Millennium Year, businesses and activity groups that were operating at that time and takes the reader for a virtual tour of the village. Maps, photographs and line drawings bring the story to life.

Copies of HUSBANDS BOSWORTH 2000 AD are available from the Historical Society, price £3 plus postage and packaging.

A FULL TRANSCRIPTION OF THE 1901 CENSUS FOR HUSBANDS BOSWORTH

Also includes "Working in Husbands Bosworth in the First Decade of the Twentieth Century" ; a talk given by John Knight to the Historical Society in 1974 (with new footnotes).

Copies of this publication are £3.50 plus postage & packaging.

A FULL TRANSCRIPTION OF THE 1881 CENSUS OF HUSBANDS BOSWORTH

A FULL TRANSCRIPTION OF THE 1841 CENSUS OF HUSBANDS BOSWORTH

A FULL TRANSCRIPTION OF THE 1851 CENSUS OF HUSBANDS BOSWORTH

A FULL TRANSCRIPTION OF THE 1861 CENSUS OF HUSBANDS BOSWORTH

A FULL TRANSCRIPTION OF THE 1871 CENSUS OF HUSBANDS BOSWORTH

A FULL TRANSCRIPTION OF THE 1911 CENSUS OF HUSBANDS BOSWORTH

NOTE:These are facsimilie copies of the printed Bygone Bosworth publications (as noted above) and contain a wealth of community, social and family history information in addition to the transcriptions.

Right everyone, pens down. Bugle QUIZ answer are now available.Click here for relief..

STOP EVERYTHING - THE BUGLE QUIZ 2022 IS HERE

Confounding expectations and proving that there's never too much of a good thing, the Bugle elves have only gone and given unto the world another Bugle Christmas Quiz.